Custom Flight Controller Part 2.4: Getting the Orientation --- Migrate to STM32

- January 10, 2017
As mentioned in the previous posts, the Matlab simulation has several issues and can only track slow rotations. Therefore, during the December holiday, I have managed to migrate the whole algorithm to a proper microcontroller of STM32F4 series and obtained much better simulation result from there.

With the new method, the microcontroller gets the data from MPU9250 using interrupt, calculates the orientation and publishes the resultant quaternion to my laptop via USB serial communication. Processing was then used to collect the quaternion data and visualize the result for testing. As the calculation of Quaternion Kalman Filter is now done by MCU instead of by Matlab, it solved the problem in previous posts.

The development board I bought was NucleoF429ZI. As the name suggests, the microcontroller it equips is STM32F429 which runs at 180MHZ which should be more than enough for our flight controller simulation. It also features a 2M Flash and includes all the necessary peripherals that you could find on an Arduino. 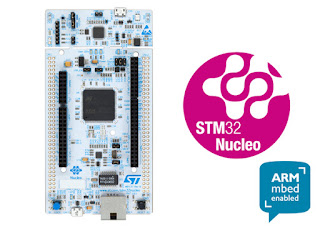 The corresponding IDE I chose was IAR embedded workbench.Another useful tool I used was STM32CubeMX provided by ST. It provides a simple GUI tool for you to enable corresponding peripherals and auto generates initialization code.
For this project, I need to enable I2C peripheral to interface with my MPU9250 sensor module from SeeedStudio as well as UART for serial communication with my laptop. The picture below shows the corresponding configuration inside CubeMX. 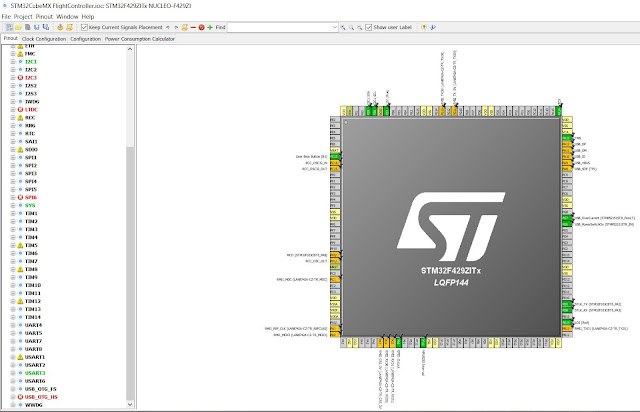 On the left side of the image, both I2C1 and USART3 are labelled green, showing that they are enabled. After which you can click project->generated code to generate initialization code for STM32. EWARM is selected as toolchain as I am using IAR embedded workbench as IDE. More detailed tutorials of how to use CubeMX can be found here.
Completing code generating will give you a folder that look like this.

An extremely useful feature of using STM32CubeMX is that you don't have to configure anything, all the necessary drivers and files are already being grouped nicely into individual folders. Opening
EWARM->project.eww led me straight into IAR workspace as shown in the figure below. 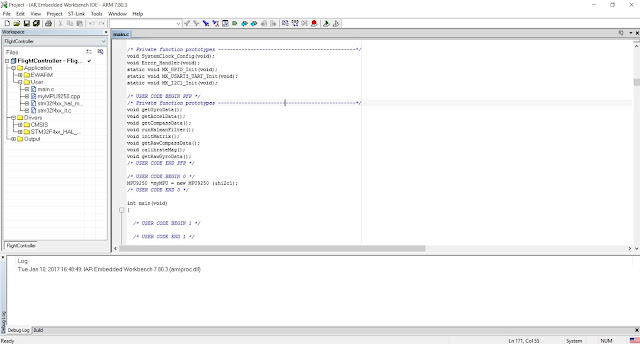 main.c has already included the initialization code for I2C and UART as well as other necessary system initialization. The next step is to change the project language from c by default to C++ as I am writing OOP. It could be easily changed by right-clicking project name, select options->c/c++  compiler and select c++ under language 1 as shown in the figure below. 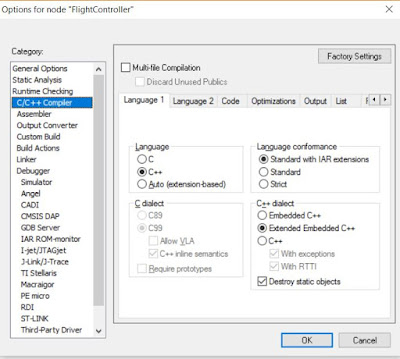 The next step is re-write all the code that I used previously into IAR workspace. My complete code could be found in my Github. Future posts will cover the code in more detail as well.

Popular posts from this blog

Accelerometer measures the acceleration experienced, gyroscope measures the angular velocity and magnetometer measures the magnetic field. In order to calculate the orientation from these IMU measurements, sensor fusion needs to be performed. Although there are numerous algorithm to achieve sensor fusion, the underlying principle should be similar. Assuming the initial orientation is known, integrating the gyroscope measurement will indicate how much the device has rotated. Combining both information allows me to predict the current orientation. Furthermore, assuming that there is no external linear acceleration, the only acceleration the accelerometer should measure is gravity which is always pointing downward. With different orientation of the device gravity measured will give different xyz axis measurement while the magnitude is remained constant. Therefore, accelerometer measurement could be used to update the orientation predicted to give a better estimate. The same theory can b…
Read more

Custom Flight Controller Part 2.5: Getting the Orientation --- QKF on STM32

The same quaternion kalman filter described in Part 2.2 was re-written in C in IAR embedded workbench to be used on STM32 microcontroller. This posts will briefly introduce and explain the migrated code.
Eigen, a popular c++ library for linear algebra unfortunately can not be recognized and compiled by the IAR C++ compiler. In the end, I chose CMSIS DSP Software Library, a library developed specifically for ARM Cortex-M processors, to perform matrix arithmetic. Correspondingly, “arm_math.h” has to be included in main.c. (arm_math.h is auto generated and recognized, you don't have to manually download or install it)
The basic format of initializing a matrix using CMSIS DSP Software Library looks like follows.
After the initialization, the matrix named matrix1 is bounded to the float array matrix1_data. Any change to the matrix instance matrix1 will change the value of float array matrix1_data and vice versa.
The library has provided all the necessary functions for basic matrix…
Read more

Custom Flight Controller Part 2.1: Getting the Orientation --- Get Data from MPU9250 Sensor Module 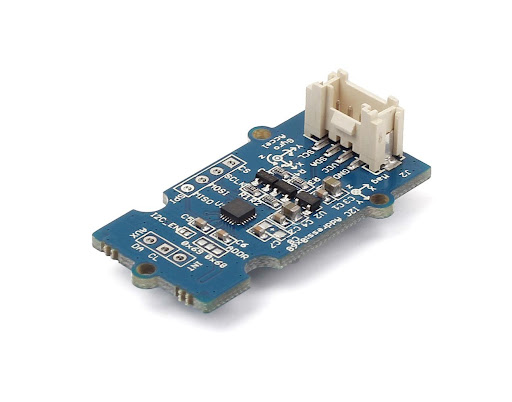 Orientation is calculated from IMU readings. In this project, I aim to use a quaternion Kalman Filter to perform sensor fusion. To test the performance of the Kalman Filter, I intend to run a simulation on Matlab that receives sensor data from Arduino via serial communication. I will write down the detailed steps below.

As innovation is not the primary interest of this project, I choose the popular MPU9250 from Invensense as my 9DOF IMU to get the orientation of the quadcopter. The supposed way is to buy the sensor, solder it onto a PCB with your chosen Microcontroller and progarm from there. Since at current stage, I am more interested to testing the software instead of building the hardware, an existing sensor module is chosen.  I bought this sensor module from SeeedStudio. The connector on the module breaks out MPU9250's I2C interface, allowing it to communicate with most Microcontroller directly. I use Genuino 101 in this case.  Th…
Read more